PAX was this weekend, and I was inspired. While waiting in lines, I read the sixth volume of Marvel’s Runaways. And I got to play some really fun games that made me really want to delve in and produce more work for my portfolio. SO I thought I’d start with some pre production pieces inspired by some of my favorite Runaways Characters.

First there’s Karolina Dean, aka Lucy in the Sky. 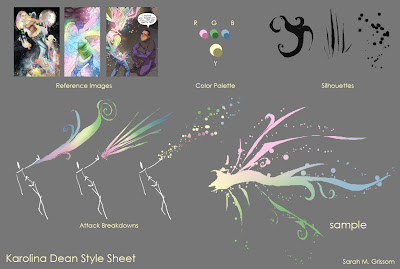 I’ve been staring at these images all weekend, so I thought I’d put them in at the top to show the reference I used. I broke down her color palette. Very soft pastel colors, with yellow being centric to the whole pattern. Then, I looked at her actual attacks and broke them into silhouettes. It’s a bit like fire, water, and hair all mixed together. It knocks people down, grabs hold of them, acts as a shield. I’m not really sure what it would feel like if I touched it… but I have a feeling it depends on her mood/motivations. So, the silouettes described are: swirly, stretchy, and sparkly, haha. The attack breakdowns describe how it would look compared to her character… how it stretches across and next to that would be a “sample” frame of the animation I’ll be doing.

Next up is Nico Minoru, aka Sister Grimm. 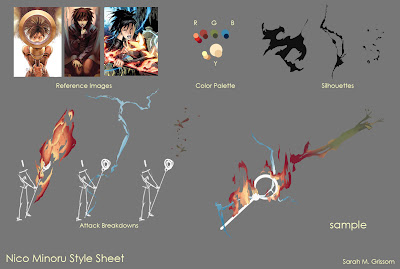 Oddly enough, I felt like the centric color in her palette (at least in her ~energy~ because I mainly focused on her big spreads and the panels where she was actually attacking something) was also yellow – but a more dark and dull yellow. I added variations, simply because her palette is fairly limited. Not many cool colors to speak of. A lot of the blue I found was actually the opposite of the rest of her general tone. So, I included a light, more saturated blue. The silhouettes describe the type of attack she deals. Karolina is an alien, but Nico is actually a witch – and her character has a gothic style. So, there’s lots of fire – which is what the outer silhouettes describe. The middle silhouette actually describes lighting… which is often randomly interacting with her, her staff, and the environment as she attacks things.

The sample frame is her staff being enveloped by fire, lighting… and the attack itself is a frog. Simply because she has a wide variety of spells that she uses, so I thought I’d take a classic and fun approach to her attack.

2D Animations soon!! Time to bust out some CS5 and get to work!