Lots of people believe that Walt Disney’s Snow White was the first feature-length animated film. Well it wasn’t. That  distinction belongs to Charlotte “Lotte” Reiniger’s The Adventures of Prince Achmed (1926). It was technically a stop-motion film using beautiful, ornate silhouettes. So, I wanted to pay a little tribute to her: Just look at those delicate digits. I can’t even draw hands that nice, let alone cut them out of black matte paper. 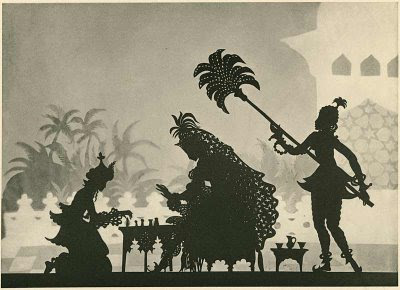 Cultural appropriation was all the rage for pre WW2 left-wing film makers. Sew exotique. Still, an amazing work of artistry and skill.

That weird geometric contraption next to her is a bastardized multiplane camera. And a ladder.

I may take these assets into after effects later and do a lil animation with them. Breathe some life into this homage. Or I won’t. We shall see.